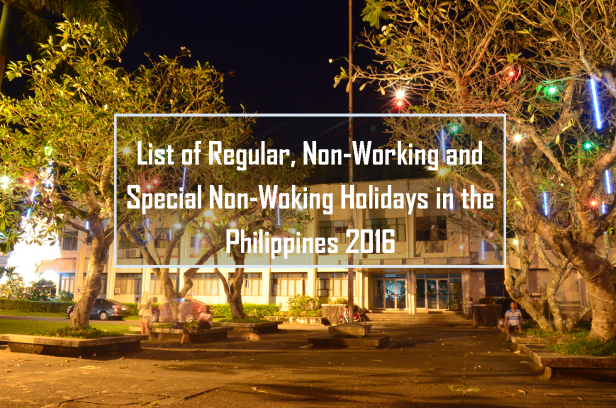 Through Proclamation no. 1105, series of 2015, signed by President Benigno S. Aquino III on August 20, 2015, the following dates are declared as regular holidays:

Whereas, the following dates are declared as Special Non-Working Holidays:

Also, under the same proclamation, additional special non-working holidays are declared. These dates are January 2 (Saturday), October 31 (Monday), December 24 (Saturday), and December 31 (Saturday). The proclamation of these additional special non-working holidays aims to (a) “strengthen family ties by providing longer New Year, All Saints’ Day, and Christmas weekends” and (b) “promote domestic tourism”.

Eid’l Fitr and Eidul Adha are also observed and declared as national holidays in the country, under RA No. 9849. The official dates of these holidays will be released once the National Commission on Muslim Filipinos (NCMF) identified them based on the lunar calendar.

With this, Filipinos can now plan and schedule their trips for 2016.