A good place can make anyone at home.

It was during my third year in college that I was able to ride an airplane for the first time. My sister, who was then pregnant, initiated a family trip including both our family and her husband’s family. As it was our first family vacation abroad, we chose a no-visa required country, thus, we chose Hongkong.

Hongkong or Hongkong Special Administrative Region (SAR) is an autonomous region of the People’s Republic of China.  It’s autonomy is based on the virtue of an agreement between the United Kingdom and China which was signed on December 19, 1984. The agreement with the United Kingdom made China pledged that the existing socialist economic system in their country will not be applied to Hongkong, and that, Hongkong would get a high level of autonomy over all aspects, excluding foreign and defense matters for the next 50 years (The World Factbook of the Central Intelligence Agency of the United States of America).

Since we wouldn’t stay that long, my sister planned our itinerary so we could visit as much tourist attractions of Hongkong as possible. These are:

Located in Tung Chung, Lantau Island, the tourist attraction is near the Hongkong International Airport and just few minutes away from the Tung Chung Mass Transit Railway (MTR) station. From Tung Chung, around 25 minutes of cable car journey will bring you to Ngong Ping Plateau. During this cable car journey, visitors will enjoy a breathtaking view of the vast mountainous terrain with wonderful forest cover of Lantau Island, the great South China Sea, Hongkong International Airport, the famous giant Tian Tan Buddha statue and the Ngong Ping Plateau in a 360 degree-perspective. 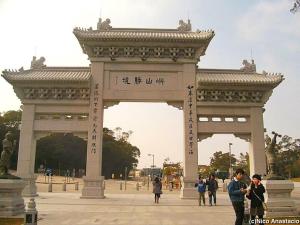 2. Avenue of Stars and Symphony of Lights

The Hongkong Avenue of Stars is a must-see tourist attaraction, especially since it can be enjoyed for free. It is located along the coastal area of Tsim Sha Tsui, southern Kowloon. It was opened to visitors from April 28, 2004. The Avenue of Stars aimed to give recognition to great names of the Hongkong film industry and also to promote tourism in the area.

The Avenue of Stars is amazing during daytime, but a very spectacular sight from the area can be enjoyed during the night, the world famous Hongkong Symphony of Lights. The symphony of lights of Hongkong is recognized by Guinness World Records as the “World’s Largest Permanent Light and Sound Show” as it involves around 40 towering buildings and can be enjoyed 8pm daily. Coloured lights, laser beams and searchlights are synchronized with music and narration. 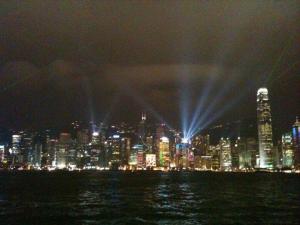 It is one of the most famous tourist attractions of Hongkong. It is considered the highest mountain in Hongkong Island, with an approximate height of 552 meters above sea level. To reach the location of the area, visitors have to ride the Peak Tram, one of the oldest and most popular funicular (inclined railway) railways in the world. Upon arriving on the Sky Terrace 428 (since the terrace is 428 meters above sea level), visitors can enjoy a 360- degree view of Hongkong.

The Hongkong Ocean Park is a themed park located in Aberdeen, Hongkong. Although the themed park is an ocean park, visitors must not just expect to enjoy sea creatures just like other ocean parks in other countries, as it also offers a wide array of attractions. The park is divided into two parts, the waterfront and the summit, which was both named after their location. These two parts of the park are connected by the park’s very own funicular train, the Ocean Express. Both the waterfront and the summit offer their visitors both an experience with animals (Panda, sea creatures, penguins, among others) and fun, breathtaking and heart-stopping rides. Aside from these attractions, the park also offers various shows such as its wonderful night show, a combination of music, narration, water manipulation, fireworks and fire show.

Dubbed as the happiest place on earth, both young and young at heart will definitely enjoy even just the sight of the themed park. It is also located in Lantau Island and accessible through MTR. The world-class park has its own customized train which the visitors will definitely enjoy because of its color, shape and decors. It is based on the original Disneyland in California. The whole park is subdivided into seven lands, namely, mystic point, grizzly gulch, toy story land, fantasy land, tomorrowland, adventureland and main street, USA, each with its own attractions. World-class shows can also be enjoyed by the visitors during their visit in the park. And a perfect way to end the Disneyland experience, visitors should stay until the world famous fireworks display, having the castle as the backdrop.

As with other things, our stay here also ended. We enjoyed the vacation until it lasted. It was like a dream for me, being a first-timer in an overseas travel.

For more info on Hongkong and its tourist attractions above, pls see the links below: